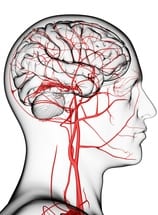 Giant cell arteritis, also known as temporal arteritis or cranial arteritis, is an inflammation of the lining of the large and medium arteries of the head, especially those in the temples. This inflammation causes swelling and may decrease blood flow, resulting in severe pain. The disorder is difficult to diagnose because its symptoms are often indistinguishable from those of other illnesses. It is critical to treat giant cell arteritis promptly because it can lead to serious consequences, including tissue damage, stroke, or aortic aneurysm.

While the underlying cause of giant cell arteritis is unknown, certain risk factors for the disorder have been isolated. These include:

Giant cell arteritis rarely occurs in people younger than 50 years of age and women are twice as likely to develop the disease as men. Approximately 15 percent of patients with polymyalgia develop giant cell arteritis.

The symptoms of giant cell arteritis vary from person to person, but may include:

Individuals experiencing any of the aforementioned symptoms should seek medical attention to obtain an accurate diagnosis of their symptoms and receive proper treatment promptly.

A series of tests may be necessary to differentiate giant cell arteritis from other conditions with similar symptoms. In addition to a comprehensive physical examination, necessary diagnosis tests may include:

The most definitive test for giant cell arteritis is usually a biopsy of a temporal artery. Several biopsies may need to be taken since inflammation may be evident only in certain sections of the blood vessel.

Giant cell arteritis is treated with high doses of corticosteroids, such as prednisone. Patients with giant cell arteritis may also be advised to begin a regimen of aspirin to increase blood flow and lessen the risk of aneurysm, blindness, or stroke. Typically, treatment is begun as soon as the disorder is suspected, even before a definitive diagnosis is made, in order to prevent possible vision loss. Symptoms usually abate soon after patients begin taking prescribed corticosteroids, but the medications may be needed for as long as a year or two. In most cases, the dose is adjusted so that the patient receives the lowest dose possible to control inflammation. During the tapering period, symptoms may recur, but it is important to reach the lowest effective dose because of the serious side effects of corticosteroid medications.

In order to counteract some of the possible side effects of corticosteroid treatments, patients are usually prescribed calcium and vitamin D supplements or other bone-preserving medications. They may also be advised to monitor their blood pressure, begin an exercise regimen, and alter their diet. The benefits of controlling giant cell arteritis are usually considered greater than the risks inherent in prolonged steroid use.